The NFO's Working in the graveyard some more

The NFO's production of Working in the graveyard continues down the west coast.

The crowds have been turning out in droves and the press has been going wild, snapping pictures and so on. See for yourself. 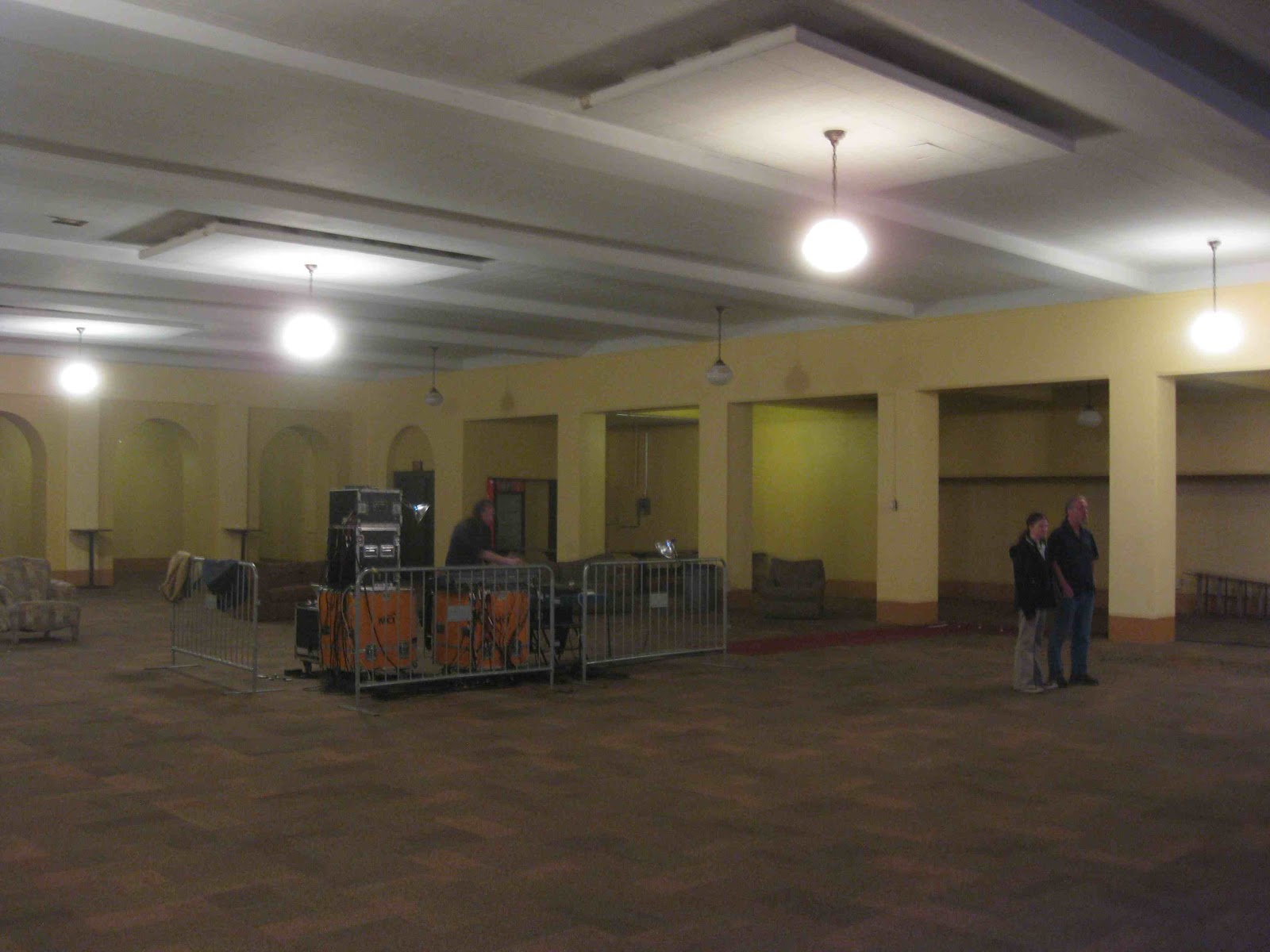 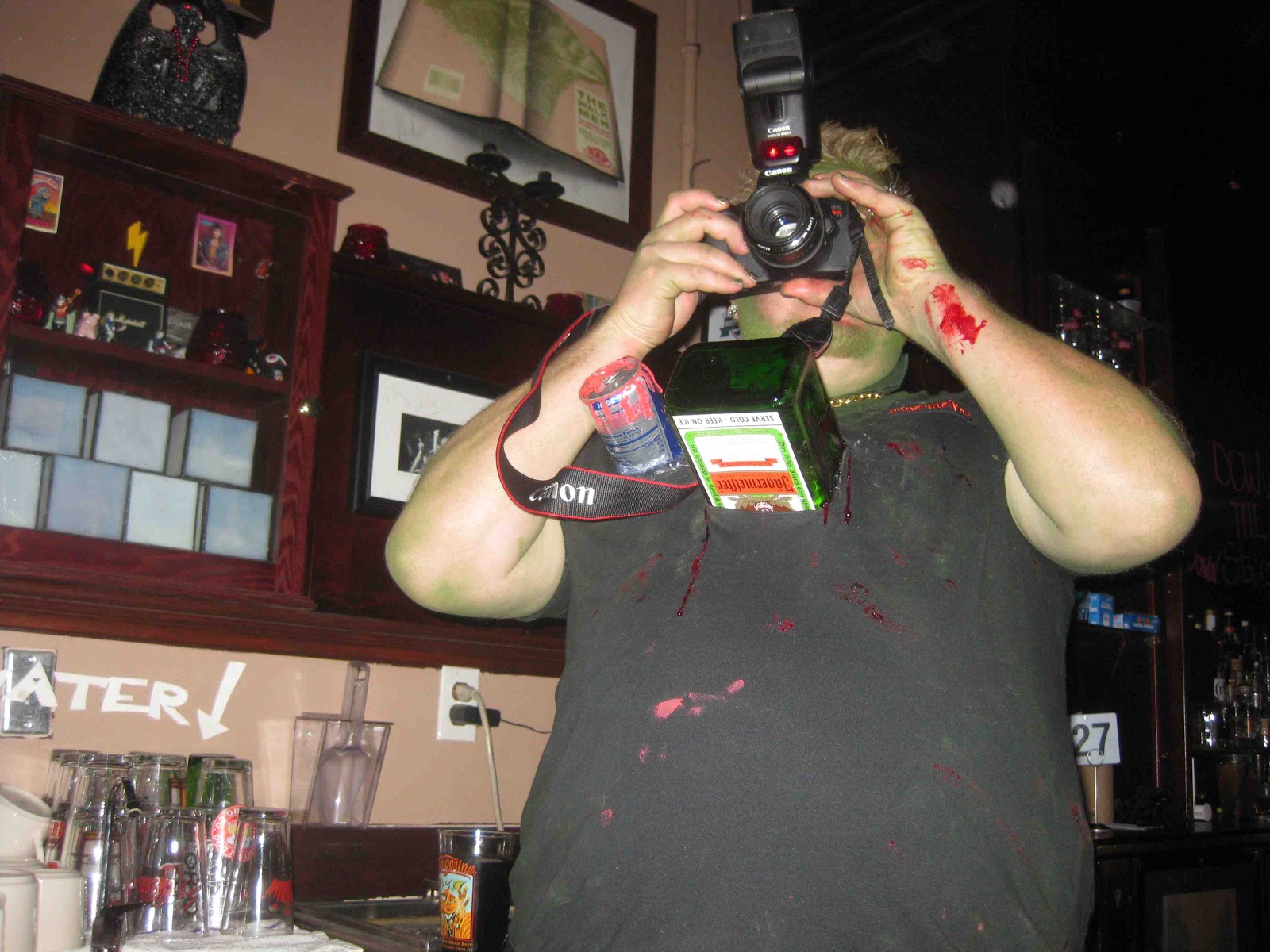 So: in honor of the release of Matricidal sons of bitches  (click here) the NFO's two-week old production of Working in the graveyard begins its series of West Coast engagements. Look somewhere else on this site for locations and dates.

Speaking of somewhere: right now, the NFO's Matthew Friedberger is somewhere out in the middle of nowhere with the stuff waiting to put on the thing. Working in the graveyard's the thing. The stuff is the bunch of junk he uses. 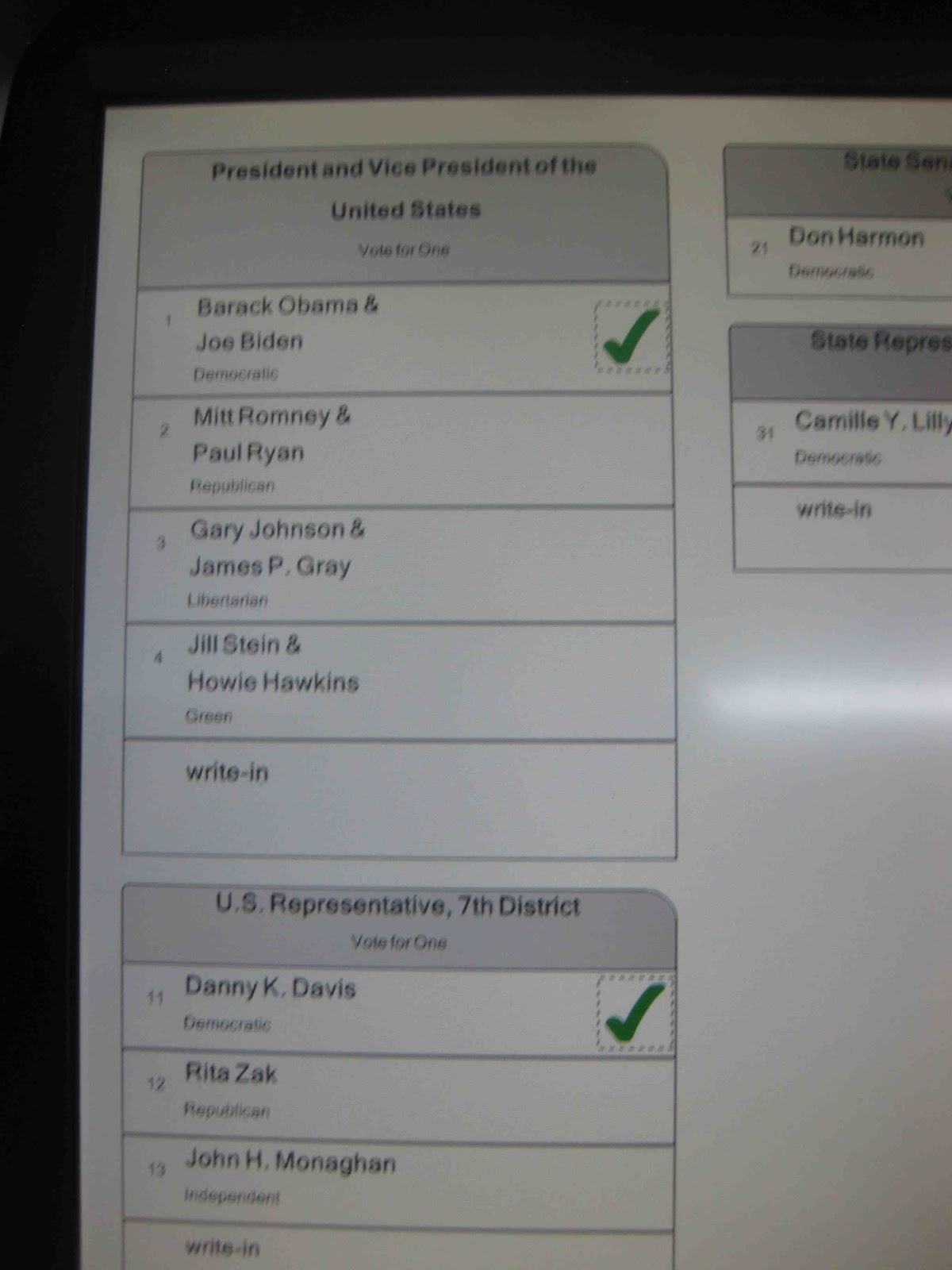 Too bad you're most likely unable to vote for Danny Davis.
Posted by Unknown at 11:30 AM

Since its new film that's not filmed, its new picture with no pictures, its new movie that doesn't go nowhere but just spins round in a circle (of the CD or LP variety; go to Thrill Jockey Records to order your copy today!), Matricidal sons of bitches, has not-tested with the test audiences so poorly, or so well, and nobody knows, in association with the Neue Friedberger Oper: Poverty Rue Productions has decided to solicit extensive re-writes to the script which isn't and re-shoots of the footage it hasn't.

So send your scraps of script, doctor, and your cinematographic, however grainy, or rainy, be it ASC or BSC, goings-out out to the electronic addresses somewheres on one of these pages. Or when Mr. Friedberger, on behalf of the Neue Friedberger Oper, is out on his tour of North America not-projecting screenings of the ain't-movie movie--Matricidal sons of bitches--go up and give him your "work". Maybe the best way to do so is to attempt to get his attention while he is trying to play the god damn music. But as Nicky Santoro says in Casino: Be nice. 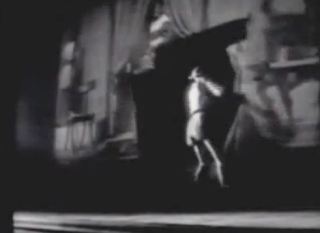 Your timely interventions will be dragged up here to the top of some website for you to judge--after having been coupled* with parts of MSB or the musical modifications Friedberger will be making while hobo-ing around with a frown on his face--probably. Of course.

Perhaps not so much Interactive as Not Really Reactive, given the record isn't out yet, and therefore you don't know what you're supposed to write or shoot about, but maybe that's for the best: let's be realistic. Let's proceed like the real world (I remember when that show first aired) does, by means of Ungleichzeitigkeit. Notatthesametimeness. Let's not be in synch, in other words. Don't worry about it.

Poverty Rue Productions, in association with the Neue Friedberger Oper, will take care of everything! You take care of the rest.*

*"Coupled": that reminds me: since the PRP's target audience or non-audience is comprised of very old, or sensitive, or sub-sentient, people who don't like swearing, or nudity, or violence, or anything at all like that sort of what-it-is, the Hays Code is in effect, in effect. How effective that will be Who Knows.

*"The rest" here means everything else, which in this case means nearly everything, and for or with no money. Or any direction or incentive, actually. Talk about fun and realistic!

Here is a non-video or ain't-movie that's for sure made by the neighbor boy (which isn't what they call them here), with music from MSB Part 2, VI.


Whatever you do, don't point your mother's camera right at the sun and send the results to anybody. Or otherwise. Let that not be an example to you all!

Neue Friedberger Oper youtube channel
Posted by Unknown at 10:42 AM

The Neue Friedberger Oper's Matthew Friedberger was forced by his record company to write a meaningless list of songs, or somethings, for a random internet website. The list is to appear somewhere on their page, no doubt off in the corner where the ads would go--as part of the site's continuing attempt to disguise the fact they have no advertisers from future would-be advertisers. I am so sure!

In exchange, the album Matricidal sons of bitches is meant to receive some exposure, but really (just between you and me) the only thing that gets exposed is--nobody cares.

Anyway. This kind of stuff happens all the time. And the worst thing is that M. Friedberger is basically scabbing, crossing the Blog Union Writers' picket line and stealing what could be--in a better world, sí, se puede--a decent job from a qualified, hardworking, thoughtful, (non-existent), internet music writer. 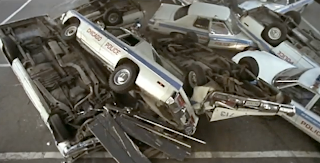 If the great John Landis and the great Danny Aykroyd said j'accuse today, if their searing, all-too-true, indictment* of the oppression of the American musician* was made yesterday and not in 1979, well: I bet they'd have to have Elwood jump the Bluesmobile over the Willis or Wallace or whatever the hell they're trying to trick people into calling it Tower because Jake has to rush to a wifi hotspot and send his desert island list of best salsa tracks since 1986 to Said the Dictaphone five hours ago.

Jeez Louise and what can you say. Below is the sad sorry list and a depiction of the typist dematerializing away into lines and dots and blanks. That's how it's gotten. 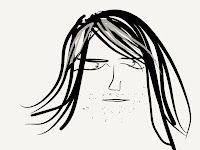 1. Eddie Harris, "Walk With Me". [NEWS FLASH! COMMENTS AND EXPLANATIONS CENSORED BY RECORD COMPANY! WEBSITE HAS EXCLUSIVE RIGHTS, THEY SAY!]

*The Blues Brothers. It came out in 1980, but it was filmed in '79. You can tell.*
*The Blues Brothers accurately depicts the continual tormenting and harassing of the American musician by nuns, state police, nazis, fiancés, national guardsmen, blind pawnshop owners, emasculating coffee shop proprietors, impresarios in Turkish Baths, malls, bars, tunnels, bridges, antiquated elevated train lines and last but not least--fellow musicians.
*I don't think you can really tell.

Information concerning the figures on the front and back of the NFO and PRP'S MSB (or MSOB (or MSoB (or MSOB's (or MSoB'S (or etc.)))))

The Neue Friedberger Oper, in association with Poverty Rue Production (and with the continuing cooperation of Thrill Jockey Records), is absolutely delighted to announce the release of further, or more, or some, information, about the faces of the folks on the front and the back pochettes of the NFO's and PRP's (with the continuing cooperation of TJR's) new movie, MATRICIDAL SONS OF BITCHES.

Think of a Richard/Richie/Rich/Dick Allen baseball card. On the back of that card would be the legend of his record, and on the left as you look would be printed Philadelphia. His accomplishments during the many thrilling years he spent with the Philadelphia National League Ball Club would be enumerated across the relevant columns.

Imagine a "Charlie Lelan" baseball card. See below. His Philadelphia equivalent would be Azcapotzalco.

Below is a picture of "Julian Nella". His Philadelphia substitute would be Dhidhimotikhon. 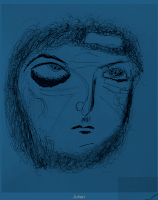 "Marco Allne". His Philadelphia would be Aubagne. 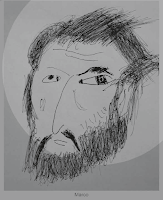 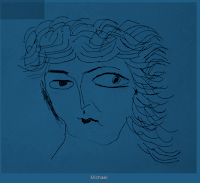 Remember this November to learn about the great Dick Allen.

Eddie Harris Day in parts of Paris not today

Here is, as simplified as possible, a version of the beginning of MSB's "Ladies-in waiting".... I. The Neighbors.*

Not that on the record it's (an) anymore complicated comrade. Fast, with an exaggerated pause at each comma: Out of the lavender mist, emerges, the pitiful countenance of, the amnesiac, evil-identical other-ganger. But where, and who, and how? Or something else but definitely ladies talk about a theme in search of a soap opera.

Of Course. The NFO' s not a recognized potentate of proclamation, but rather, recreation; 'recognized' isn't the thing and; no endorsement, by the heirs, legacy-of-Eddie Harris, of the NFO is suggested hereby and by.

* Written by M. Friedberger. It's totally original; there is not even one bit of "Layla" or March of the Seven Centipedes is in it--at all. In other words--tell ASCAP.

Don't you rush reading. Because that's not only. Other newer, later to be released, NFO/PRP pictures, invisible but not at all inaudible, will be exposed or shown off or press played at these events or rock shows or uninhabited caves--and convention centers--for the Very First Time--Jesus H. Christ. New Titles Include:

And or others that don't exist, yet or ever, or not. And, and--each show, from the NFO/PRP/MF angle, will be different (than the other ones; meaning the music'll be, changed up rotated according to the diagram, and...), and.... On and on, over and out, on and on. Be sure and plan to attend as often as possible.

Here is a photo of Peter from MSB.

So--make sure you buy your tickets in advance but what's actually going to happen and what else? Don't ask--Do tell--What the hell. Just go/Look out below:

So--that's not all. You should also get these NFO/PRP associated outputs for the run up, before hand, have it in hand. Keep it in mind. Come on down and buy yourself a drink guy. You deserve it pal. Take it from me buddy. Whatever it is. Click underneath.

http://www.thrilljockey.com/thrill/Matthew-Friedberger/Solos-6xLP-Box-Set
Posted by Unknown at 6:14 AM

"Does The Diabolical Principle succeed as a stand-alone work?" Absolutely, says the NFO

The Neue Friedberger Oper agrees, it's hard to say, just how very something, composer and Neue Friedberger Oper volunteer, Matthew Friedberger's THE DIABOLICAL PRINCIPLE, is, or was. But surely, a song called Shirley is featured and, it is a mess-terpiece of the contemporary song cycle répertoire, or rock music, or whatever it is you like, and however you want to put it. And you know where you can put it! Right straight in your music machine.

Here is a review of THE DIABOLICAL PRINCIPLE which appeared in the British magazine The Wire; it was sent to the NFO as two jpegs by the record company.

And now the second bit. 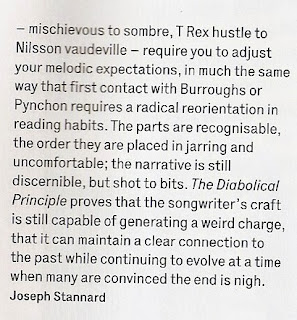 As always, the NFO does not comment on, or respond to, notices: though it just did. No endorsement or regard, or indeed any term that might reasonably be construed positively, is implied concerning the reviewer and his or her periodical.*

Certainly not. But what can you do? Follow the link below and purchase for yourself THE DIABOLICAL PRINCIPLE. 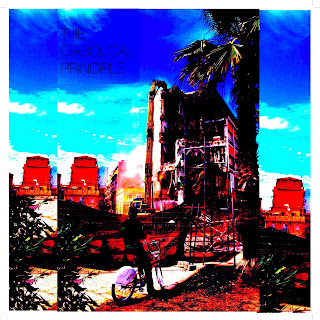 *Admittedly, nor is the reverse.
Posted by Unknown at 2:12 AM